Many people are still not quite sure how to screenshot on a mac. In this article, I will show you the basics of taking screenshots and what they can be used for!

The “how to screenshot on macbook pro 2020” is a step-by-step guide with photos. The instructions will show you how to take a screenshot on the Mac. 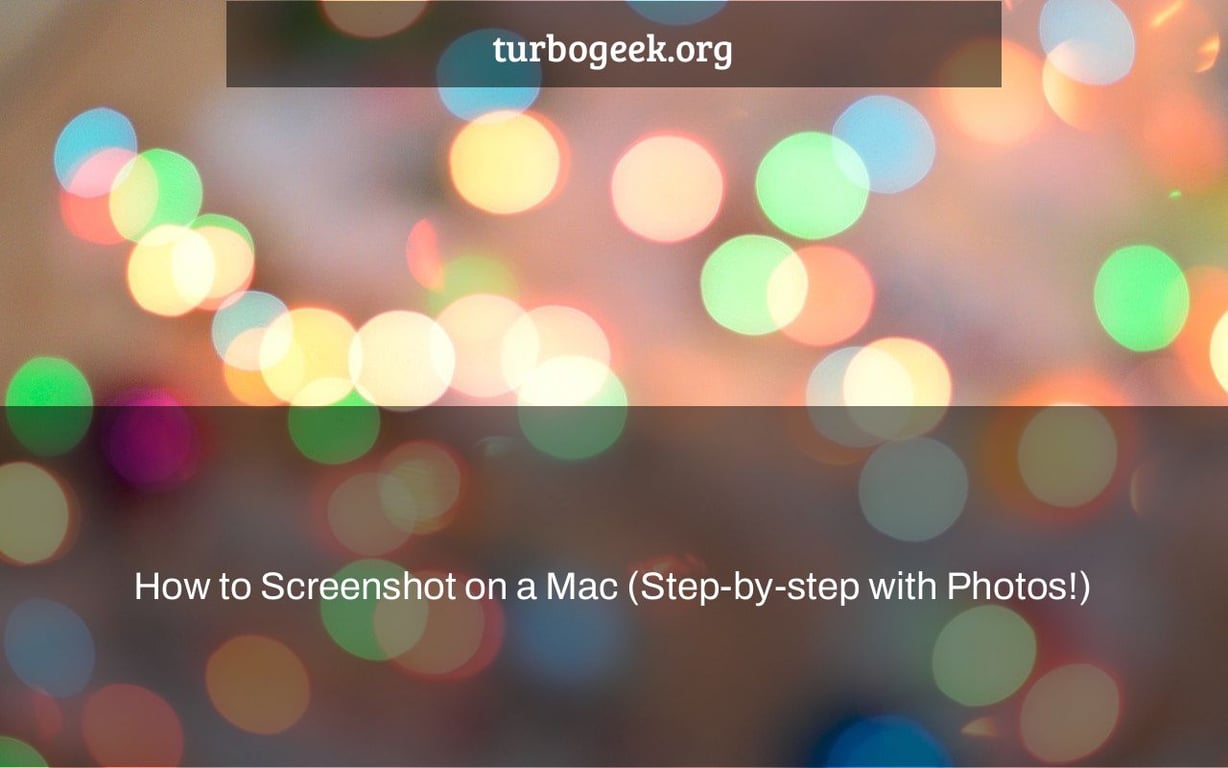 If you have a Mac and are wondering how to take a screenshot on it, you’ve come to the right place! Users may snap screenshots of their screens in a variety of methods, including utilizing simple keyboard shortcuts or the handy Search with a spotlight function. Despite the fact that there are several methods to take a screenshot, many people are ignorant of which shortcuts to use or which is the most convenient.

Screenshotting on a Mac is a really easy procedure, since Apple has made it as simple as possible in the hopes that customers would remember how to utilize the tool.

Continue reading below to learn more about screenshotting on a Mac and other related topics.

The first method for taking a screenshot on a Mac is to use the Shift, Command, 3 keyboard shortcut. This shortcut will capture the full screen if you hold down these three keys.

If users do not wish to leave any section of the screen blank, they should utilize this shortcut. After the shot has been taken, it may be cropped and customized to your liking. To alter the screenshot, go to the bottom right-hand corner of the screen and click on the thumbnail of the picture.

Shift, command, 3 is one of the simplest methods for taking a screenshot on a Mac since it only requires three steps. This shortcut is the easiest choice if customers want the full screen to appear in the shot. This shortcut, on the other hand, does not allow for much customization.

This is not the shortcut to use if users wish to remove certain sections of the screen before taking a snapshot. Instead, make use of the following shortcuts.

Another way to screenshot on a Mac is to hold down the Shift, Command, and 4 keys. This keyboard shortcut allows you to use the cursor as a tool to decide what to include in the shot. This shortcut lets users choose precisely what they want to be captured—all it’s up to them.

To utilize the new picture-capturing cursor (which will resemble crosshairs), just click and drag the tool in the correct direction from the location where you want the shot to begin.

A thumbnail of the screenshot will display in the right-hand corner of the Mac screen after it has been finished. If you see this thumbnail, it implies your screenshot was successful. If the picture does not appear, the user should try again with the screenshot.

Shift, Command, 4 gives the user total control over the contents of the screenshot. Users should use this keyboard shortcut if just a piece of the screen needs to be photographed.

If Shift, Command, 4 is accidentally opened, use the escape key on the Mac keyboard (top left) or just push down on the trackpad (if using a laptop) without clicking or dragging.

The Spacebar replaces the Shift, Command, and 4 customizability options with a selection of which area of the screen will be captured in the snapshot. If you have two windows open next to each other, for example, pressing Shift, Command, 4, Spacebar enables you to choose which one to screenshot.

Left-click the screen after pressing Shift, Command, 4, and Spacebar (or just click on the trackpad). The screenshot will be completed, and the thumbnail will display in the Mac’s right-hand corner. To crop and alter the picture to your liking, click the thumbnail and make your changes from there.

However, any adjustments to the thumbnail should be done as fast as possible, since the thumbnail will vanish after a few seconds.

If the Spacebar is accidentally pressed when trying to use the shortcut shift, command, 4, tap it again. Re-clicking the Spacebar will unhighlight areas of the screen, allowing users to choose how much of the screen they wish to include in the shot once again.

The pointer will transform from a camera symbol to crosshairs. If the whole function is an accident, however, press the escape key on the Mac keyboard’s top left. 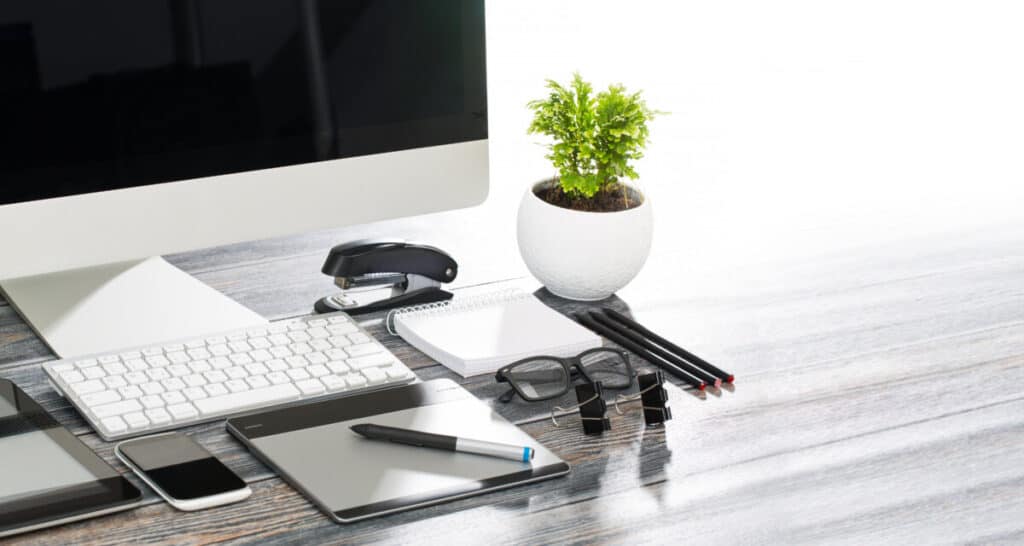 The most well-known method of screenshotting on a Mac is to hold down Shift, Command, and 5. This is because when you activate this keyboard shortcut, all of the choices display on the screen automatically. Users may pick what they want simply by looking at the list of accessible functions. Shift, Command, 5 is a shortcut that all Mac users should learn since it enables them to capture and record their screen.

Furthermore, there are several options to customize the snapshot to the demands of the consumers. After you’ve used the Shift, Command, 5 shortcut, click the options menu button to get a list of possible saving settings, timer options, and other options.

Users may save the screenshot to one of the following destinations under the “Save to” heading:

Users may set the timer to none, 5 seconds, or 10 seconds under the “Timer” header.

Users may choose whether or not to display the floating thumbnail, retain the previous selection, or show the mouse pointer under the “Options” section.

If you unintentionally hit Shift, Command, 5, you may deactivate the screenshot by using the escape key.

Many Mac users find remembering all of the numerous keyboard shortcuts difficult or impossible. Many people avoid learning shortcuts and functionalities since there are so many to master. Fortunately, there are still methods to take screenshots on a Mac without having to memorize any shortcuts.

Hover the pointer over the upper right-hand part of the screen on the Mac. A magnifying glass should appear, with the words “Spotlight Search” appearing after clicking on it. Type “screenshot” into the search box. When you choose the first option, the same screen that appears when you select shift, command, 5 will show.

On a Mac, Where Can I Find Screenshots?

Once you’ve remembered all of the various keyboard shortcuts, taking a screenshot may be an easy procedure. But what about locating the screenshots once they’ve been taken? Many users are unable to retrieve previously taken images and must resort to shooting a new screenshot to compensate for their inability to locate them.

As a consequence, identical screenshots are often captured, causing the Mac’s storage to fill up faster. Taking several screenshots is also inconvenient and involves more steps than required.

On a Mac, launch the Finder software to locate a screenshot. This app is where all of the various files on the computer, from programs to airdropped images, are stored. When you capture a screenshot, it is immediately saved to the Desktop folder. Screenshots are stored in this folder so that users may discover them as fast and simply as possible.

Users may launch the Finder app and choose “Recents” towards the top if the screenshot was captured recently. Because the files will be in the sequence in which they were stored onto the Mac, the most current screenshot should display.

The screenshot will be saved on your desktop as well.

How Do You Save Screenshots on a Mac?

Screenshots are saved to the desktop and are automatically saved as a PNG file. Screenshots are stored as “Screen Shot [date] at [time].png” files. This standard title makes it simple for users to locate their screenshots, particularly if they know when they were taken.

Despite the fact that Mac screenshots are stored as PNG files, users may convert them to PDF, TIFF, JPG, or GIF files. All of these are popular choices that the user may choose. If this is the case, users should go to How to Change the Default Screenshot File Format in macOS for a full step-by-step guide.

If you need a visual illustration of how to alter the file format of a screenshot while using a Mac, watch the video below:

On a Mac, how do you alter the screenshot file format?

Why Doesn’t a Mac Allow You to Take Screenshots?

Find out how to take a screenshot in this tutorial.

Many people believe that their Mac’s screenshot functionality is broken when, in fact, they are just not utilizing it appropriately. Users sometimes need to be taught how to perform something since text alone isn’t always sufficient. If a user is having trouble getting screenshots to function on a Mac, check the video below.

This video will go through all of the various screenshot shortcuts as well as the processes that must be performed in order to capture a good screenshot on a Mac.

How to Take a Screenshot on a Mac

Turn off the Mac

Macs often need to be turned off. Even the most powerful gadgets, such as Macs, need rest. Shut off the Mac and switch it back on if the screenshot capability isn’t working. Most of the time, this easy change will solve the problem. If it does not, though, there may be a more significant problem with the machine.

Sometimes, without the user’s knowledge, incorrect settings are switched off or on. This might happen by mistake or as a result of a computer breakdown. Users should review their settings if they can’t get screenshots to function in any case.

Help with the Menu Bar

Although using the assistance tool is not a different means of screenshotting on a Mac, it does explain how to do it so that users do not have to know any keyboard shortcuts. Users should constantly seek out the help button if they are puzzled or need clarification about their Mac, since it will give good explanation whenever feasible.

Users should hover over the top of the screen until the menu bar displays to activate this feature. Click the “Help” button at the end of the left-hand functions once the menu bar appears. Type “screenshot” into the search box, then choose “Take screenshots or screen recordings on Mac” under the Help Topics header.

The macOS user guide will then go through how to capture a screenshot or record a screen on a Mac in great detail. This lesson will teach users how to utilize keyboard shortcuts. Although the assistance button on the menu bar will not capture a screenshot for the user, it may be utilized if the user forgets to do so. This instruction is especially useful for novice Mac users or those who have never taken a screenshot before.

Screenshots are a great way to save your work and get it back later. This article will show you how to take a screenshot on your Mac step-by-step with Photos! Reference: mac screenshot to clipboard.

How do you capture a screenshot on Mac?

A: On a Mac, you can use the Command-Shift-4 shortcut key to screenshot.

How do I take a screenshot on my Mac without dragging it?

A: You can use the Command + Shift keys to take a screenshot on your Mac without dragging it.

How do you save a screenshot as a picture on a Mac?

A: To save a screenshot as an image on your computer, the instructions are to use F12 or Shift + Command (Apple) and then click and drag until you have created your desired size.

TIDAL HiFi Plus: Here’s everything that’s new about it

Lepy vs Lepai: What’s The Difference?